Unexpected Dip in Gamma Rays from the Sun 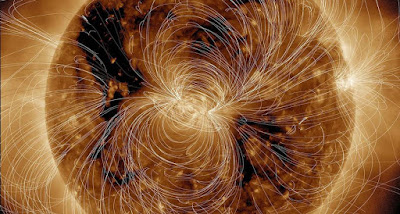 The sun radiates at a range of energies from the high-energy range to the low-energy range. However, new data, spanning this broad energy range, reveals just how much we don’t know about our own star.
The gamma-rays we observe from the Sun are thought to be due to the interactions of hadronic cosmic rays with the solar atmosphere. Although gamma rays are produced in the solar interior, they are thought to leave the sun as much lower energy waves due to scattering effects. Back in 1991 David Seckel, Todor Stanev and Thomas Gaisser thus proposed that cosmic rays from outer space would be turned around or “mirrored” before entering the sun, thus emerging as a faint glow of gamma-rays. However, the underlying mechanism responsible for the production of these gamma rays is not fully understood – all that is known is that its efficiency must be enhanced by magnetic field interactions. Read more here.
To further understand the mechanisms responsible, Qing-Wen Tang and his team analyzed the gamma ray emission from the sun for the past 9 years – spanning nearly one full 11-year solar cycle. The magnetic activity of the sun oscillates from low to high activity over an 11-year cycle – the solar cycle.
In agreement with recent studies they detected significant emission across all energy ranges – from 1-200 billion electron volts (1-200 GeV). As well, as expected, they observed clear anticorrelation between the lower energy gamma-ray emission and solar cycle – during solar minimum more cosmic rays can reach the magnetic field near the sun’s surface to get “mirrored”, which is why more gamma-rays of the lower energy range would be observed at solar minimum. However, in the middle range of energies of 30-50 billion electron volts (30-50 GeV) they found a dip in an otherwise continuous spectrum. The team say that such a dip “was not predicted, is not understood, and may provide crucial clues to the gamma-ray emission mechanism.”
The lower energy gamma ray emission can be explained by the current theory, however, the significant emission of high energy gamma rays, along with the dip in the data, does not agree with the current theory as put forward by Seckel, Stanev and Gaisser.
“It’s amazing that we were so spectacularly wrong about something we should understand really well: the sun.” – Brian Fields, a particle astrophysicist at the University of Illinois.
Our understanding on the sun, its magnetic field and/or new physics could be the answer. To delve deeper the team of scientists investigating the data hope that more data, and data in the even high energy realms of trillions of electron volts (TeV), could provide the answer.
“The worst that can happen here is that we find out that the sun is stranger and more beautiful than we ever imagined … and the best that could happen is we discover some kind of new physics.”  – John Beacom, a professor at Ohio State and one of the leaders on the analysis.

If the gamma-rays are of high enough energy and intensity – as would be produced by a black hole dynamic – then higher energy gamma-rays would be observed to be emanating from the sun and would not be as affected by the effects of scattering. Perhaps the gamma-rays we observe are both from the interior black hole dynamic of the sun and the exterior “mirrored” cosmic rays as proposed by Seckel, Stanev and Gaisser. So, we observe the very high above 50 GeV from the interior and the very low 1-10 GeV from the surface – maybe that is why we see a gap in the spectrum. There are many interesting explanations, but one thing for sure is our understanding of the sun, its energy and its magnetic field are yet to be fully understood.
Article: https://www.quantamagazine.org/gamma-ray-data-reveal-surprises-about-the-sun-20190501/
Posted by Yashvir Singh at 07:50

Email ThisBlogThis!Share to TwitterShare to FacebookShare to Pinterest
Labels: Dip, from, Gamma, in, Rays, sun, the, Unexpected