Why when person yawns does another. 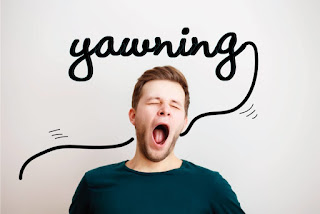 Next time you're sitting near someone who yawns, try this: Don't yawn. Odds are, you'll find that it's pretty difficult to hold back.
The reason that it's hard to stifle a yawn — especially when someone nearby is doing it and you're trying hard not to — appears to reside in the area of the brain that's responsible for motor function, a new study from England finds.
Scientists refer to the urge to yawn when you see someone else doing it as contagious yawning. This is a type of "echophenomenon." In other words, it's an automatic imitation of another person, according to the study, published online today (Aug. 31) in the journal Current Biology. Other types of echophenomena include "echolalia" (imitation of someone's words) and "echopraxia" (imitation of someone's actions.
Posted by Yashvir Singh at 06:57