New Hydrogel Hybrid Could Be Used To Make Artificial Skin

New Hydrogel Hybrid Could Be Used To Make Artificial Skin: 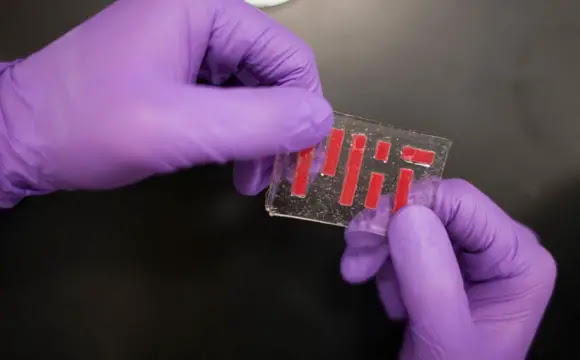 MIT engineers have developed a method to bind gelatin-like polymer materials called hydrogels and elastomers, which could be used to make artificial skin and longer-lasting contact lenses.
If you leave a cube of Jell-O on the kitchen counter, eventually its water will evaporate, leaving behind a shrunken, hardened mass — hardly an appetizing confection. The same is true for hydrogels. Made mostly of water, these gelatin-like polymer materials are stretchy and absorbent until they inevitably dry out.
Now engineers at MIT have found a way to prevent hydrogels from dehydrating, with a technique that could lead to longer-lasting contact lenses, stretchy microfluidic devices, flexible bioelectronics, and even artificial skin.

See how MIT researchers designed a hydrogel that doesn’t dry out. Video: Melanie Gonick/MIT
The engineers, led by Xuanhe Zhao, the Robert N. Noyce Career Development Associate Professor in MIT’s Department of Mechanical Engineering, devised a method to robustly bind hydrogels to elastomers — elastic polymers such as rubber and silicone that are stretchy like hydrogels yet impervious to water. They found that coating hydrogels with a thin elastomer layer provided a water-trapping barrier that kept the hydrogel moist, flexible, and robust. The results are published in the journal Nature Communications.
Zhao says the group took inspiration for its design from human skin, which is composed of an outer epidermis layer bonded to an underlying dermis layer. The epidermis acts as a shield, protecting the dermis and its network of nerves and capillaries, as well as the rest of the body’s muscles and organs, from drying out.
The team’s hydrogel-elastomer hybrid is similar in design to, and in fact multiple times tougher than, the bond between the epidermis and dermis. The team developed a physical model to quantitatively guide the design of various hydrogel-elastomer bonds. In addition, the researchers are exploring various applications for the hybrid material, including artificial skin. In the same paper, they report inventing a technique to pattern tiny channels into the hybrid material, similar to blood vessels. They have also embedded complex ionic circuits in the material to mimic nerve networks.
“We hope this work will pave the way to synthetic skin, or even robots with very soft, flexible skin with biological functions,” Zhao says.
The paper’s lead author is MIT graduate student Hyunwoo Yuk. Co-authors include MIT graduate students German Alberto Parada and Xinyue Liu and former Zhao group postdoc Teng Zhang, now an assistant professor at Syracuse University. 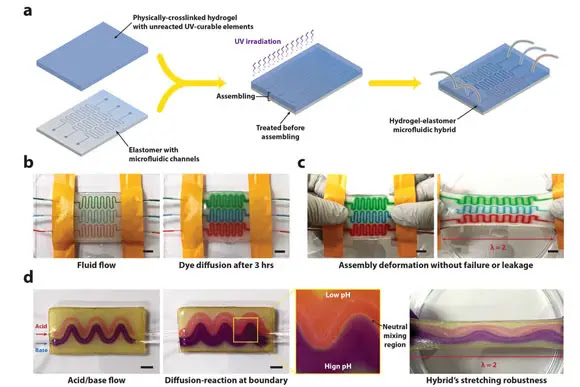 Figure (a) shows the fabrication procedure for a hydrogel-elastomer microfluidic chip. Figure (b) shows that the hydrogel-elastomer microfluidic hybrid supports convection of chemicals (represented by food dye in different colors) in the microfluidic channels and diffusion of chemicals in the hydrogel, even when the material is stretched, as seen in figure (c). In figure (d), the microfluidic hybrid is used as a platform for a diffusion-reaction study. Acid and base solutions from two microfluidic channels diffuse in the pH-sensitive hydrogel and form regions of different colors (light red for acid and dark violet for base).
Getting under the skin
In December 2015, Zhao’s team reported that they had developed a technique to achieve extremely robust bonding of hydrogels to solid surfaces such as metal, ceramic, and glass. The researchers used the technique to embed electronic sensors within hydrogels to create a “smart” bandage. They found, however, that the hydrogel would eventually dry out, losing its flexibility.
Others have tried to treat hydrogels with salts to prevent dehydration, which Zhao says is effective, but this method can make a hydrogel incompatible with biological tissues. Instead, the researchers, inspired by skin, reasoned that coating hydrogels with a material that was similarly stretchy but also water-resistant would be a better strategy for preventing dehydration. They soon landed on elastomers as the ideal coating, though the rubbery material came with one major challenge: It was inherently resistant to bonding with hydrogels.
“Most elastomers are hydrophobic, meaning they do not like water,” Yuk says. “But hydrogels are a modified version of water. So these materials don’t like each other much and usually can’t form good adhesion.”
The team tried to bond the materials together using the technique they developed for solid surfaces, but with elastomers, Yuk says, the hydrogel bonding was “horribly weak.” After searching through the literature on chemical bonding agents, the researchers found a candidate compound that might bring hydrogels and elastomers together: benzophenone, which is activated via ultraviolet (UV) light.
After dipping a thin sheet of elastomer into a solution of benzophenone, the researchers wrapped the treated elastomer around a sheet of hydrogel and exposed the hybrid to UV light. They found that after 48 hours in a dry laboratory environment, the weight of the hybrid material did not change, indicating that the hydrogel retained most of its moisture. They also measured the force required to peel the two materials apart, and found that to separate them required 1,000 joules per square meters — much higher than the force needed to peel the skin’s epidermis from the dermis.
“This is tougher even than skin,” Zhao says. “We can also stretch the material to seven times its original length, and the bond still holds.”
Expanding the hydrogel toolset
Taking the comparison with skin a step further, the team devised a method to etch tiny channels within the hydrogel-elastomer hybrid to simulate a simple network of blood vessels. They first cured a common elastomer onto a silicon wafer mold with a simple three-channel pattern, etching the pattern onto the elastomer using soft lithography. They then dipped the patterned elastomer in benzophenone, laid a sheet of hydrogel over the elastomer, and exposed both layers to ultraviolet light. In experiments, the researchers were able to flow red, blue, and green food coloring through each channel in the hybrid material.
Yuk says in the future, the hybrid-elastomer material may be used as a stretchy microfluidic bandage, to deliver drugs directly through the skin.
“We showed that we can use this as a stretchable microfluidic circuit,” Yuk says. “In the human body, things are moving, bending, and deforming. Here, we can perhaps do microfluidics and see how [the device] behaves in a moving part of the body.”
The researchers also explored the hybrid material’s potential as a complex ionic circuit. A neural network is such a circuit; nerves in the skin send ions back and forth to signal sensations such as heat and pain. Zhao says hydrogels, being mostly composed of water, are natural conductors through which ions can flow. The addition of an elastomer layer, he says, acts as an insulator, preventing ions from escaping — an essential combination for any circuit.
To make it conductive to ions, the researchers submerged the hybrid material in a concentrated solution of sodium chloride, then connected the material to an LED light. By placing electrodes at either end of the material, they were able to generate an ionic current that switched on the light.
“We show very beautiful circuits not made of metal, but of hydrogels, simulating the function of neurons,” Yuk says. “We can stretch them, and they still maintain connectivity and function.”
Syun-Hyun Yun, an associate professor at Harvard Medical School and Massachusetts General Hospital, says that hydrogels and elastomers have distinct physical and chemical properties that, when combined, may lead to new applications.
“It is a thought-provoking work,” says Yun, who was not involved in the research. “Among many [applications], I can imagine smart artificial skins that are implanted and provide a window to interact with the body for monitoring health, sensing pathogens, and delivering drugs.”
Next, the group hopes to further test the hybrid material’s potential in a number of applications, including wearable electronics and on-demand drug-delivering bandages, as well as nondrying, circuit-embedded contact lenses.
“Ultimately, we’re trying to expand the argument of using hydrogels as an advanced engineering toolset,” Zhao says.
This research was funded, in part, by the Office of Naval Research, Draper Laboratory, MIT Institute for Soldier Nanotechnologies, and National Science Foundation.
Publication: Hyunwoo Yuk, et al., “Skin-inspired hydrogel–elastomer hybrids with robust interfaces and functional microstructures,” Nature Communications 7, Article number: 12028 doi:10.1038/ncomms12028
Source: Jennifer Chu, MIT News
Posted by Yashvir Singh at 19:32