Could the Information Paradox Finally Be Resolved? 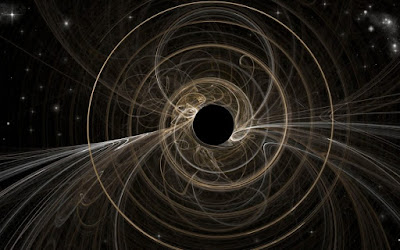 The information paradox may finally be resolved with the help of the holographic theory – but this time on a fractal scale.
Ever since Hawking predicted the thermal emission of black holes and their subsequent evaporation, the question arose as to where this information goes. In the context of the Copenhagen interpretation of quantum mechanics – which states that the information about a system is entirely encoded in its wave function – information is always conserved. Thus, any loss in information, like that predicted by Hawking and his evaporating black holes, would violate quantum theory. This problem is known as the information paradox.
To resolve this paradox, physicists have been actively looking for a mechanism to explain how the information of the infalling particles re-emerges in the outgoing radiation. To begin, they need to determine the entropy of the Hawking radiation.
Assuming the duality of a black hole – as proposed by Juan Maldacena in his 1997 AdS/CFT (Anti-de Sitter/Conformal Field Theory) correspondence theorem – a black hole can be described quantum mechanically and will thus evolve in a unitary fashion. The entropy of the Hawking radiation will thus increase monotonically until the black hole has lost half its entropy and then decreases monotonically down to zero when the black hole has evaporated completely.
However, in accordance with the second law of thermodynamics, the entropy should not decrease with time! So, the black hole entropy is thus given in terms of a ‘generalised’ entropy in which the surface entropy plus the entropy of all matter outside the black hole, including Hawking radiation, never decreases. In a 2015 paper, Netta Engelhardt and Aron Wall from the University of Santa Barbara in California noted that at short wavelengths, the external entropy diverges due to vacuum entanglement. To remove this divergence, the generalised entropy was instead defined by arbitrary surfaces, specifically surfaces that extremizes the generalised entropy, known as quantum extremal surfaces. At first it was still found that these quantum extremal surfaces did not solve the problem; that is, Hawking radiation did not evolve in a unitary fashion and thus the information paradox remains.
Now a team of scientists from the Institute for Advanced Study at Princeton University, led by Ahmed Almheiri, have proposed a solution utilising higher dimensional mathematics that describes a bridge to the interior of the black holes.
In their latest paper, they consider a gravity theory coupled to matter where matter has a higher dimensional holographic dual––it’s as if there is a hologram within a hologram. This allowed them to compute the entropy of Hawking radiation holographically, ensuring the quantum extremal surface of the evaporating black hole and the quantum extremal surface of the Hawking radiation coincide. The Hawking radiation and the black hole interior are thus connected via wormholes following the ER=EPR conjecture in physics that states entangled particles are connected via wormholes. The ER=EPR conjecture was proposed in 2013 by Leonard Susskind and Juan Maldacena and was named after the initials of the authors Albert Einstein and Nathan Rosen (ER), who wrote the first paper on wormholes – otherwise known as an Einstein Rosen bridge – and Albert Einstein, Boris Podolsky and Nathan Rosen (EPR) who wrote the first paper on entanglement.
Posted by Yashvir Singh at 00:17