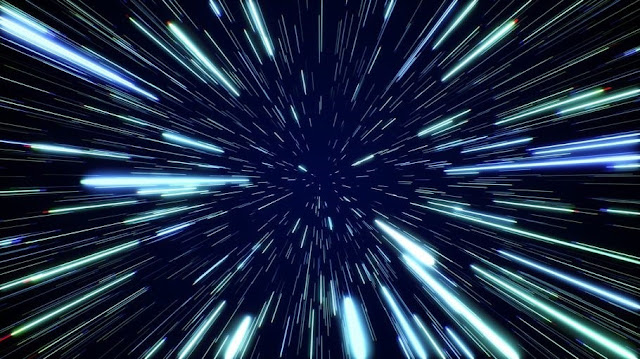 Twentieth Century technology has relied on the use of fuels and chemical propellants to propel our ships, planes, and cars. The propulsion technology of the future will not use chemical combustion to produce thrust, and the 21st century will see the emergence of propellant-less propulsion systems. Such technologies will provide the means to travel faster than ever before at a fraction of current costs and with no pollution by-products.
This becomes absolutely crucial for interplanetary and interstellar travel, as we have stated before in RSF commentary1 reporting on Resonance-based technology may provide inertial mass reduction—the future of space travel will not be performed with chemical propellants. As an example, to date the most viable proposal for an interstellar mission with current technological capabilities is the Breakthrough Starshot project which will use a fleet of light sail probes propelled to 20% percent the speed of light via laser pulses.
Considering the significant limitations of combustion-based propulsion (as well as the harmful environmental impacts), there is a strong drive to develop the next-generation propulsion systems that will move us into the next phase of technological advancement. Torus Tech, a research and development company founded by Nassim Haramein, the founder of the Resonance Science Foundation, is researching quantum vacuum engineering technologies that will enable gravitational control and zero-point energy production.
NASA is also moving forward with developing novel propulsion systems. NASA has been working on a number of small skunkworks projects, one of which—the EmDrive—has shown promise as a viable methodology for producing thrust with microwave resonance. In a new proposal, David Burns at NASA’s Marshall Space Flight Center has described a novel propellant-less propulsion system that, much like the EmDrive, utilizes relativistic effects to generate thrust in what he calls a Relativistic Momentum Transfer Model. David Burns describes his novel design in a research paper the Helical Engine. The drive derives its appellation from the core engine which is a helical particle accelerator. The core propels ions down a helical beam guide, which imparts both a z-axis velocity component and a rotational component—it is tantamount to an ionic vortex propelled (rotating in the X and Y axes) propelled along its Z-axis. The helical beam guide is tapered, so that the base has a smaller diameter than the top, in this way ions moving through the waveguide can be accelerated at one end while the radius of rotation increases, increasing the absolute velocity; and decelerated on the return with a decreasing radius of rotation, reducing the absolute velocity. 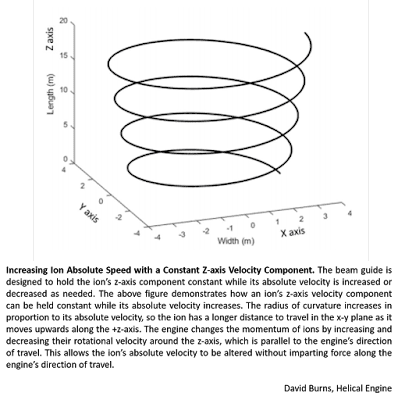 The end result is that the ions have more mass at one end of the core where they transfer their momentum to the ship, and less mass at the other end, resulting in a net-increase of momentum in the direction of travel. The core is a closed-loop helical beam guide, so no ions are required to be added or expelled, and because of the relativistic effects the drive essentially produces thrust by expelling the ions’ mass as “propellant”. The velocity change for an ion traveling through a single cycle is small, however the beam guide contains over 3×1012 ions that complete over a half million round trip cycles each second, in which each ion applies a force aligned with the direction of travel of the ship.
There are significant challenges before the Helical Engine can become a practical technology. It requires a lot of energy to control the electric and magnetic components of the particle accelerator and produces small amounts of thrust relative to the energy requirements. It will require solar panel power for satellite operations and nuclear power for interplanetary and interstellar travel. However, with a fission reactor the engine could produce thrust indefinitely without the need for significant refueling, enabling the craft to accelerate to extremely high speeds, and the engine will be reliable as the ions are the only moving part. Further critical thinking and design will undoubtedly bring the Helical Engine to a practical propulsion technology.
Read more: NASA engineer’s ‘helical engine’ may violate the laws of physics
RSF In-Perspective:
1We are not going to be able to travel to the stars using chemical combustion engines. In fact, interplanetary transit within our local solar system is impractical utilizing chemical combustion. Even the height of explosion-based “blow-it up” technology, external nuclear pulse propulsion, detailed in the Orion Project, would take 44 years traveling at its top speed (0.1c) to reach the nearest stellar system to our own. The reasons for becoming an interstellar civilization are myriad and a prerequisite to the long-term survivability of humanity. In addition, the same technology that would get us to the stars would enable us to travel on the surface of earth without producing pollutants that alter the atmosphere and environment, allow for the means to feasibly capture and sequester green-house gases, and the ability to deflect potentially devastating asteroids and meteoroids. As such, a technology with even the smallest potential to offer novel means of propulsion and energy production should be explored in earnest, even if current physics theory say it is “impossible”.
Resonance-based technology may provide inertial mass reduction. By: William Brown, Biophysicist with the Resonance Science Foundation.