Mammalian Skull Morphology Converges on the Golden Ratio in Humans 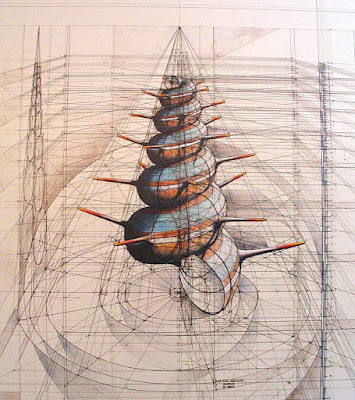 The Golden Ratio (Phi, or φ = 1.618. . .) is a unifying quantity of structure and function in nature as it underlies morphogenesis in living organisms as well as in many other naturally occurring phenomena. The ratio can be observed by taking a line and dividing it into two unequal parts, with the length of the longer part divided by the shorter length being equal to the entire length divided by the longer part. This will always yield the Golden Ratio, and structures that obey this partitioning are ordered based on the Phi proportion.
The unification of quantity of structure with function in the Phi ratio is most evident by its reoccurrence in human anatomy and physiology. Now in a new comprehensive study performed at John Hopkins, researchers have found that the human skull dimensions follow the Golden Ratio, and what is most remarkable is that in other related mammalian species the skull morphologies diverge from Phi. 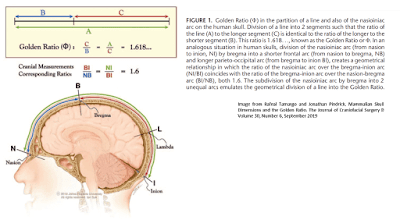 The Johns Hopkins researchers compared the neocranium of 100 human skulls to 70 skulls from six other animals and found that the human skull dimensions converged on the Phi ratio—while the skulls of less related species such as dogs, two kinds of monkeys, rabbits, lions and tigers diverged from this ratio. Such results indicate that the difference between the ratios show a trend toward convergence on φ correlating with species complexity.
The anatomy and evolution of the human skull have been the focus of intense study. Evolving over millenia, the human skull embodies an elegant harmonization of structure and function. –Rafael Tamargo and Jonathan Pindrik, MDs at John Hopkins, 2019. 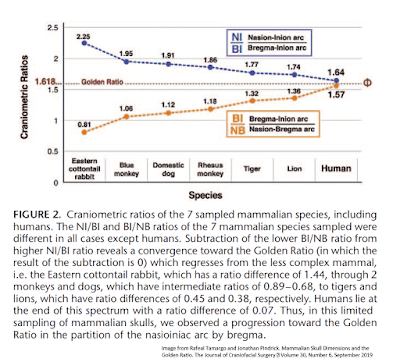 The Universe is not random. Numerous studies have now shown that underlying the morphogenesis, architectural organization and functional synergy of structures and systems across scale in the universe, there are natural dynamics that give rise to precise mathematical and geometric ordering parameters. From the double logarithmic and helical spirals found in galaxies, seashells and DNA (see RSF original article: The Morphogenic Field is Real and These Scientists Show How to Use It to Understand Nature) to the φ proportions of the human anatomy, remarkable functionality and organizational synergy emerge from simple physical and mathematical relationships at the heart of nature. When we identify these mathematical constants at the genesis of form and function in nature, we call them Sacred Geometry—like the Phi spiral, the Flower of Life, and the Platonic and Archimedean Solids. The Symmetry and precise proportionality of these ratios and geometries are stunning, but they are not just aesthetic wonders of nature. They encode deep functionality that can give us insight into the greater nature of the inner operations of our universe.
Journal Reference:Rafael J. Tamargo, Jonathan A. Pindrik. Mammalian Skull Dimensions and the Golden Ratio (Φ). Journal of Craniofacial Surgery, 2019; 30 (6): 1750 DOI: 10.1097/SCS.0000000000005610

Email ThisBlogThis!Share to TwitterShare to FacebookShare to Pinterest
Labels: Mammalian Skull Morphology Converges on the Golden Ratio in Humans