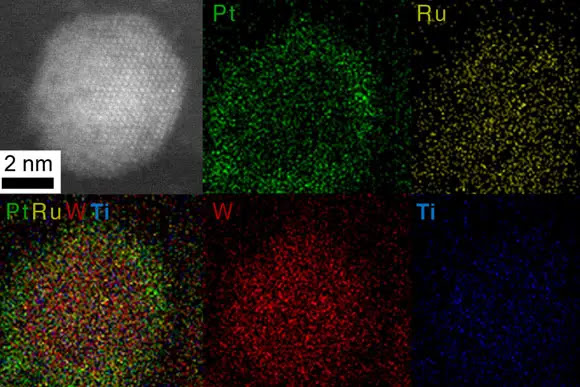 A sample of a core-shell nanoparticle made by the researchers is shown in images made using scanning transmission electron microscope (STEM) and energy-dispersive x-ray spectroscopy (EDX). Color images show where the different elements are located in the particle, with the precious metals platinum (Pt) and ruthenium (Ru) concentrated in the shell, and the other constituents, tungsten (W), and titanium (Ti), concentrated in the core. 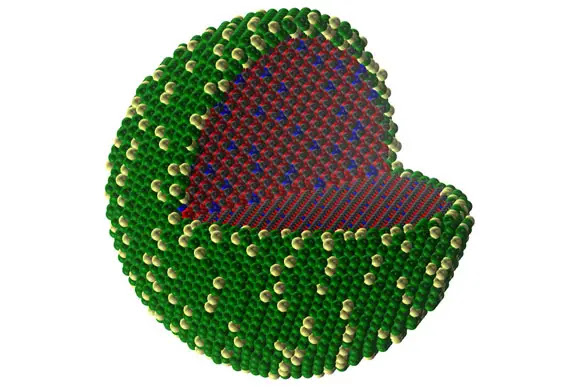 A simulation of the core-shell structure shows the arrangement of the different elements as they have separated themselves into the two regions.
“For a long time, many researchers have been trying to find ways to make stable coatings of noble metals over earth-abundant cores,” Román-Leshkov says. “There has been some success using metallic cores like nickel and cobalt, but the particles are not stable over long periods of time and end up alloying with the noble metal shell.” Carbides, on the other hand, are resistant to corrosion and clustering, and also cannot alloy with noble metals, making them ideal core candidates.
But noble metals – which get their name from their general reluctance to take part in any kind of chemical activity – don’t easily bond with other materials, so producing coatings from them has been an elusive goal. At the same time, transition metal carbides are extremely difficult to engineer into nanoparticles with controlled properties. This is because they need high temperatures to force carbon into the metal lattice, which leads to particle clumping and surfaces contaminated with excess carbon layers.
The key breakthrough, Hunt says, was to encapsulate the shell and core material precursors into a template made from silica. “This keeps them close together during the heat treatment, making them self-assemble into core-shell structures, conveniently solving both challenges at the same time,” he says. The silica template could then be dissolved away using a simple room-temperature acidic treatment.
In addition to greatly reducing the amount of precious metal required, the process turned out to have other important benefits as well.
“We found that the self-assembly process is very general,” says Hunt. “The reluctance of noble metals to bind to other materials means we could self-assemble incredibly complex catalytic designs with multiple precious metal elements present in the shell and multiple inexpensive elements present in the carbide core.” This allowed the researchers to fine-tune the properties of the catalysts for different applications.
For instance, using a nanoparticle with a platinum and ruthenium shell coating a carbide core made of tungsten and titanium, they designed a highly active and stable catalyst for possible applications in direct methanol fuel cells. After the catalyst was put through 10,000 electrochemical cycles, the new design still performed 10 times better than conventional nanoparticles after similar cycling.
Yet another gain is that these nanoparticles are highly resistant to a problem that can plague other forms of noble-metal catalysts: “poisoning” of the surface by carbon monoxide. “This molecule can drastically curtail the performance of conventional catalysts by bonding to their surface and blocking further interaction, but on the core-shell catalysts, the carbon monoxide detaches more easily,” Román-Leshkov says. While traditional hydrogen fuel cell catalysts can only tolerate 10 parts per million (ppm) of carbon monoxide, the researchers found that their core-shell catalysts could tolerate up to 1,000 ppm.
Lastly, the researchers found that the core-shell structure was stable at high temperatures under various types of reaction conditions, while also remaining resistant to particle clumping. “Whereas in other classes of core-shell nanoparticles the shell dissolves into the core over time, noble metal shells are insoluble in carbide cores,” says Hunt. “This is just another one of the many benefits that ceramic cores can have in designing active and stable catalysts.”
Although work for the translation of the new concept into a commercializable form is still preliminary, in principle it could make a big difference to applications such as fuel cells, where “it would overcome one of the main limitations that fuel cells are facing right now,” Román-Leshkov says, namely the cost and availability of the needed precious metals. In fact, with the assistance of MIT’s Translational Fellows Program, Milina has been focusing on the commercial aspects of the technology, identifying the potential market, value, and customers for these novel materials.
“This is an important discovery regarding the potential applications of core-shell carbide particles coated with precious metal layers,” says Jingguang Chen, a professor of chemical engineering at Columbia University, who was not involved in this work. “It would significantly reduce the amount of precious metals needed, and it could show better catalytic performance due to the synergistic interactions between the precious metal coating and the carbide core,” he says. “Even though these advantages were predicted from previous studies of thin-film model systems, the current study demonstrates the feasibility of potential commercial applications using core shell structures.”
The research team also included Ana Alba-Rubio and James Dumesic at the University of Wisconsin at Madison. The work was supported by the U.S. Department of Energy and the National Science Foundation.
Posted by Yashvir Singh at 10:03