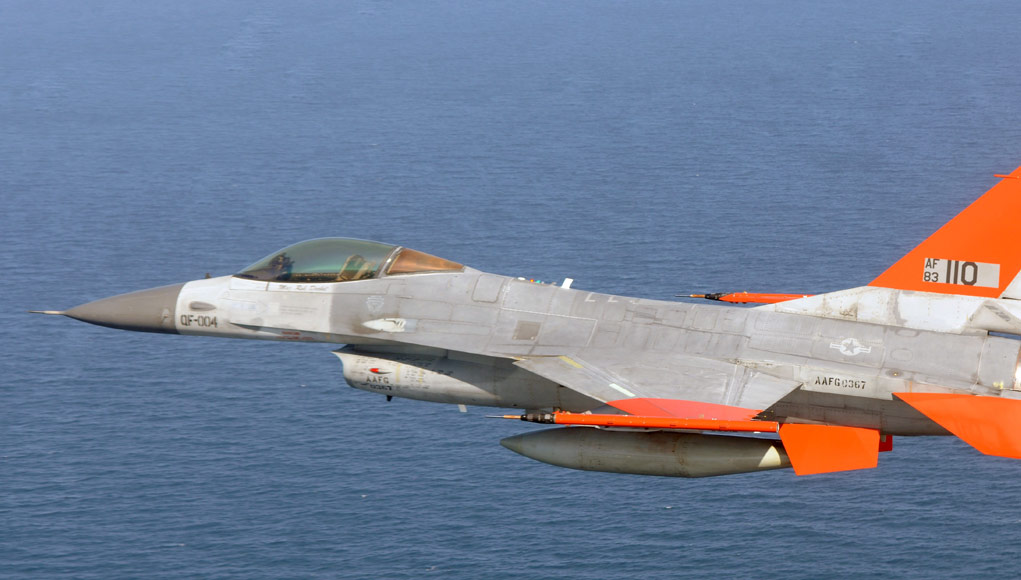 Erlier this week, the Air Force tested a new version of their F-16 fighter. But this test was unlike any other in Air Force history: the plane would be flying without a pilot.

Over the skies of Florida and the Gulf of Mexico, the unmanned plane known as the QF-16 took off, executed a series of tactical maneuvers, broke the sound barrier, and landed safely. Two pilots flew the planes from the ground.
In other words, the Air Force just successfully tested the world’s most lethal drone.
A fully-loaded F-16 has a six-barrel M61 gun, along with 11 other places to mount weapons, including nuclear missiles.
“It was a little different to see it without anyone in it, but it was a great flight all the way around,” said Air Force Lieutenant Colonel Ryan Inman, the commander of the 82nd Aerial targets Squadron at Tyndall Air Force base just east of Panama City. “It’s a replication of current, real world situations and aircraft platforms they can shoot as a target. Now we have a 9G capable, highly sustainable aerial target."
The drones aren’t expected to be used in combat, but are to be used as targets in dogfight exercises. They will be equipped with one bomb in case the plane has to be destroyed.


It seems unimaginable that such a complex machine could be flown remotely. But as the surreal video below shows, it’s not only possible, it’s a stunning reality.
An F-16 costs about $20.4 million ($14.6 million from 1998 adjusted for inflation. But this one was not taken out of active duty. It had been sitting in a salvage yard in the Arizona desert for more than a decade before being renovated and retrofitted by Boeing.
Right now, there are six QF-16s. Boeing removed the guns on each of the planes and replaced them with technology that allows them to be flown remotely. They’re replacing the QF-4 drones, which were prone to crashing.
"I can tell you that there are no plans to use these aircraft as a combat asset," Air Force spokesman Master Sergeant Randy Redman told AFP. "This is just the next step in the evolution of the training program to ensure that our pilots remain the best in the world."
But the F-16 drones are another reminder of how quickly the use of unmanned equipment is spreading in the U.S. armed forces. It also shows that some of the world’s deadliest weapons can be operated thousands of miles from the battlefield.
Posted by Yashvir Singh at 17:19