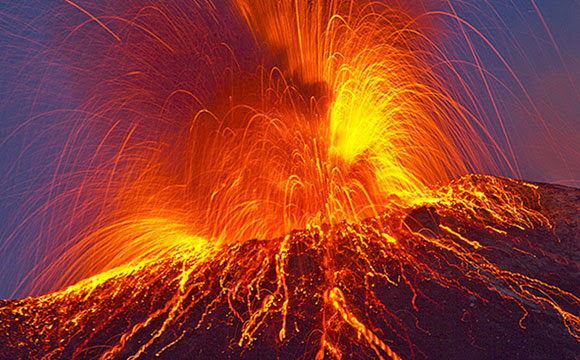 A newly published study shows that for the majority of Earth’s history, continental arc volcanism has been the main driver of long-term climate variability.

A geology-based analysis of Earth’s climate history over the past 700 million years provides evidence that climate change has occurred traditionally through slow shifts in the release of carbon dioxide — a stark contrast to today’s rapid release of carbon dioxide.
Scientists at Yale, the University of Texas-Austin, and Rice University created a global database of volcanic activity going back 720 million years, in order to study the ebb and flow of warm and cold climate that Earth has experienced. The findings appear in the April 22 edition of the journal Science.
The researchers found that for the majority of Earth’s history, continental arc volcanism — which occurs along subduction zones where oceanic crust plunges beneath a continent due to tectonic plate adjustments over millions of years — has been the main driver of long-term climate variability. Intervals of increased continental volcanic activity associated with the formation of continents and mountain ranges released carbon dioxide into the atmosphere and matched up with warmer “greenhouse” periods, said the researchers, while times of little or no volcanic activity matched colder, glacial periods.
The research team compiled uranium-lead (U-Pb) age data for 120,000 individual grains of zircon, a mineral that is created during continental volcanic activity, which was collected from ancient and modern sediment across the globe.
“We’re looking at changes in zircon production on various continents throughout Earth’s history and seeing how the changes correspond with the various icehouse and greenhouse transitions,” said lead researcher Ryan McKenzie, a Yale postdoctoral associate who began the research while at the University of Texas-Austin. “Ultimately, we found that during intervals of high zircon production Earth experienced greenhouse conditions, and as zircon production diminishes, there was a shift into icehouse climates.”
Co-author Noah Planavsky, an assistant professor of geology and geophysics at Yale, said the study’s explanation of long-term climate shifts is essential context for today’s discussions about future climate change.
“Our study provides strong support for the idea that long-term climate change is driven by very slow changes in the release of carbon dioxide, indicating that the current jump in carbon dioxide is anomalous over at least the past half a billion years,” Planavsky said.
The other co-authors of the study were Brian Horton, Shannon E. Loomis, and Daniel Stockli of the University of Texas at Austin, and Cin-Ty Lee of Rice University.
The National Science Foundation funded the research and the Yale Flint Post-Doctoral Scholars programs.
Posted by Yashvir Singh at 21:20